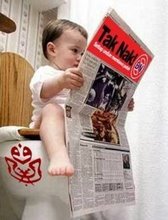 
The state of Perak is now the state of "Berak" (Shit). This is a real Fiasco caused  by UMNO. This illegitimate state government of UMNO which was rejected by the people of Perak is a real shame with their show of bullying tactics just because they have the police and the judges under their control goes on to show their arrogance by again getting the court order to ban the people from gathering within 50 meters of the state legislative assembly.

The State Legislative Assembly is a representation of the people and as such how can it be possible to obtain a court order to ban people from going near the people's assembly, this is beyond common logic, are they so afraid of the people of Perak? Even the state secretariat building will be off-limits to its staff and the people of Perak.

And this is further aggravated by the show of force with the police taking up position in and around the building. This is truly a government by force and they might as well declare Berak a police state.

This is an uncivilized government and goes about bullying and creating fear through the use of the courts and their police. This is their police and not the police that is suppose to protect and safeguard the people.

If you are so determined to govern than for goodness sake go get your mandate from the people of this state and is that so difficult? Get yourself elected and show that you have got real balls rather than hiding behind the skirts of the police and the courts!

UMNO is just showing that they are crooks and are robbing the people of their rights. Rule only if the people want you! Without an election mandate from the people You are now nothing but Gangsters!

What more to say or do, they are holding the fire power. Sad to say that many voters can so easily be bribed and manipulated by simple rhetoric and slogan.

We are doomed if we do not change the Federal Government comes the next GE.

Shit has hit the fence!

Perak government was brought down by a lady from Jelapang, Ipoh.
Turncoats are there in politics.The other two guys from PKR were victims of China Dolls offer of sex.They were in UMNO earlier.They mastered corruption there.
They know no loyalty. Treachery is the name of the game.
Now you see that in MCA. At least Lee Lam Thye become pro after quiting DAP politics.
Ibrahim Ali was the famous 'katak'
Can we trust politicians ? They take us for ransom.

Yes umar there is much treachery in Perak Berak today and will see no end to this and Perak is being stunted and the work of government has stopped.

Only solution is the mandate from the people.