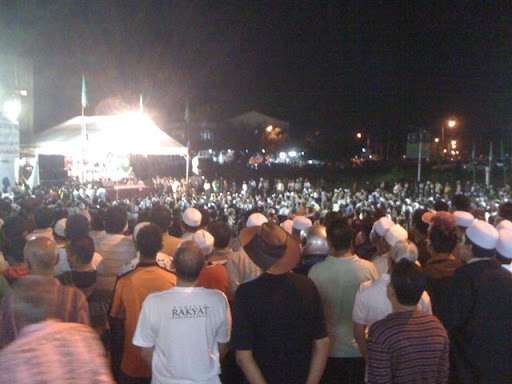 The huge crowd had overspilled on to the road and people were seen standing on chairs and cars as Anwar speaks.

Anwar gave a rousing speech to call on the people to unite against corruption and the deceptive and devious politician of Barisan National. The crowd responded to his every call with cheers of "reformasi".

His speech ended at 12 midnight sharp and thus bringing this by-election campaign to an end. Tomorrow will be polling day and the Barisan Rakyat Bloggers will be reporting from ground zero.

There are still the usual grouses as regards to postal voting by the servicemen and the election commission had yet to address the process and procedures of postal votes and PAS had threathen to bring this matter to the courts but we shall wait and see.

We were caught in a massive traffic jam and it to took us more than one and a half hours just to travel 4 miles from the ceramah venue to "Jom Makan" where we met up with Datuk Kamarul and Ronnie Liu for some light supper.

On our way there we saw an incident where there appears to be a standoff between umno and pas supporters adding to the already massive traffic jam. We saw the umno people taunting the PAS supporters and as we pass them these same people were shouting profanities at us in the blue blitz.

Well we shall leave it as such and tomorrow we shall see the results of this by election.
Posted by Unknown at 3:23 AM