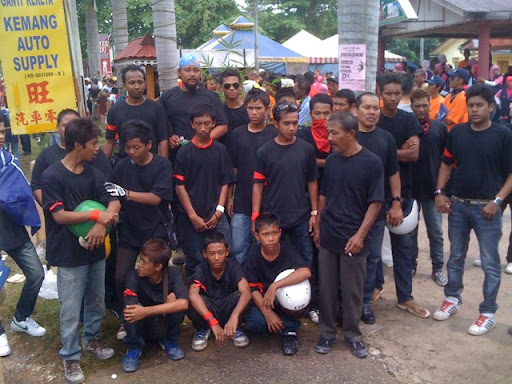 UMNO problem in election campaigning is that they are paying monies for young and underaged boys to act as their supporters. And they are led by their youth members as to show a bigger crowd.

These young boys and "Mat Rempit" are difficult to control and gets out of hand as is shown here in Bagan Pinang.

We had our experience with them yesterday night when we were caught in a traffic jam, they were shouting at us in the van out of nowhere and seems to be provoking us into a quarrell or fight however we civilised people just ignored them. They were persistent and determined in their provocation.

There were two major incident today and all witnessed by the Barisan Rakyat Bloggers and in both instances there were injuries and even the police got hit. We were informed that 15 umno supporters were arrested.

Above are photos of the young umno supporters as taken in the Teluk Kemang incident as reported earlier. See for yourself these underage boys.
Posted by Unknown at 2:38 PM

Where is the darn Education Minister?? He is sorely needed to comment on the distateful and illegable use of SCHOOL CHILDREN in the elections.