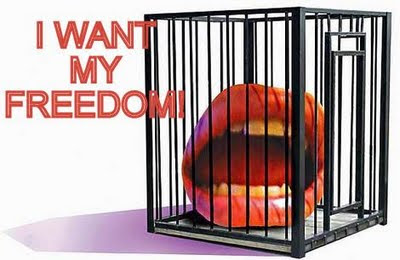 The call for freedom is getting ever louder as we advance through this cyber age of the internet, man were born to be free, free from oppression from men and history had repeatedly proven that oppression by rulers and governments will only eventually lead to destruction.

In this cyber age, governments and tyrants can no longer stupefy its populace in their quest for perpetual power, we have seen how autocratic governments through the process of long term psychotic indoctrination by suppressing the growth principles of the freedom in the attainment of knowledge and supplanting inferior quality into the system whilst segregating mental spheres of self perception generating racial and religious misconceptions and mistrust amongst its people so that they or their kind can rule forever. And when overdone, uncontrollable degeneration and confusion of thoughts spawn extremism and soon swamp the entire nation and region often creating much conflict and death which can take generations to repair and make good again.

Only freedom can prevent such from happening in this present age and freedom is about the respect for Human Rights, and the most basic of all Human Rights is the Freedom of Speech which is universally enshrined. How can you stop people from talking? And in certain countries they still have laws that put people in jail for just talking! This is primitive and of dinosaur mentality! This can only limit mental growth and stupefy its people.

But this day mark a milestone, this day the 8th of October 2009, in one of the fastest growing  and suppressive nation in this present time, that is China, the Internet Human Rights Declaration was launched, and most aptly called the "China Internet Human Rights Declaration". This document was jointly issued and drafted by 15 highly regarded intellectuals of  scholars, lawyers writers and etc as stated below.

This documents consist of 10 points and as listed herein:


Those of us who are standing on the embankment overlooking the torrent of history have witnessed the potential of this new technology: the Internet. We understand how this new technological revolution has brought about progress and social changes. It has great potential to advance basic human rights and freedom for Chinese people. Its contribution to civilisation will be on a par with the discovery of iron and fire, or the invention of plough and wheel in ancient days.

We acknowledge the arrival of netizen activism and regard it as an irreversible trend. Citizen reporting, which involves the use of mobile phones and digital cameras for in-situ information dissemination, has become fashionable and trendy. The Internet has also provided netizens with unlimited space for creativity and for voicing opinions through weblogs, podcasts, BBS and online comments.

We believe it is a citizen’s responsibility to be concerned about public affairs, and a netizen’s responsibility to care about freedom of speech on the Internet. Netizens are exercising their civil rights when they legally express their opinions or when they report the truth of what has actually happened. The best way to rejuvenate an ancient civilisation is to inject it with new core values based on the advancement of happiness and of basic human rights for individuals. It is also the best way to improve well-being for everyone in China. For these reasons, freedom of speech on the Internet should be encouraged, nurtured and tolerated.

We therefore pledge for the following principles to be endorsed:


1. Freedom of speech on the Internet is a part of citizens’ rights to freedom of speech. It is the most basic human rights and the most fundamental value that should be pursued, treasured and protected.

2. Netizens who express their opinions on the Internet using words, sounds, pictures or videos, should be protected and encouraged, as long as such conduct is in accord with the constitution and local statutes.

3. The right to publish opinion is the most basic rights for netizens. This includes the right to publish through weblogs and podcasts, as well as online discussion forums. Netizens’ rights to publish should not be subjected to unlawful investigation and interference. They should be allowed freedom to hold and to express their views without feeling intimidated.

4. Netizens’ editorial rights should be respected. When they are exercising those rights, they should not be subjected to harassment by authorities who act outside of law.

5. It is the right of Netizens to conduct interviews and to report their findings. This right is protected as a part of their constitutional rights to freedom of speech. Netizens who excercise this right should endeavour to report the truth, and to avoid distortions, fabrications and malicious slander.

6. It is the right of netizens to make comments and to exchange opinion. This includes the right to ask questions, to monitor, to criticise and to boycott.

7. Netizens’ freedom of speech encompasses a right to express themselves anonymously. Anonymity enables some authors to express their opinions in ways that best suit their needs. This legal right should be respected as long as an anonymous author is expressing his views in accordance with legal and constitutional requirements.

9. Online privacy should be respected and protected. Netizens’ real identities and personal information should not be disclosed unless the information is required for a transparent legal proceeding, or else if the disclosure is necessary under the rule of law.

10. The freedom of disseminating information should be respected and protected as long as it is conducted in line with legal and constitutional requirements. Website monitoring, filtering and blockades that go against the principle of freedom of speech should be condemned by public opinion. Netizens are entitled to seek freedom of expression and justice through judicial proceedings.


We call for the establishing of an Internet Human Rights Day, to remind everyone of the need to safeguard freedom of speech on the Internet. This is the only effective way to make sure all people in China enjoy human rights and happiness.

10 October 1911 was the day when a group of patriots staged an uprising to end the rule of a cruel and racist dynasty. They also put an end to a long imperialist history. As a way of commemorating their bravery and their spirit of freedom, we suggest to make every October 10th China’s Internet Human Rights Day.

A Chinese version of the declaration can be found HERE.
Posted by Unknown at 8:00 AM

I fully endorse this! Thanks for highlighting, Hawkeye :-)

Is UMNO A Racist Party