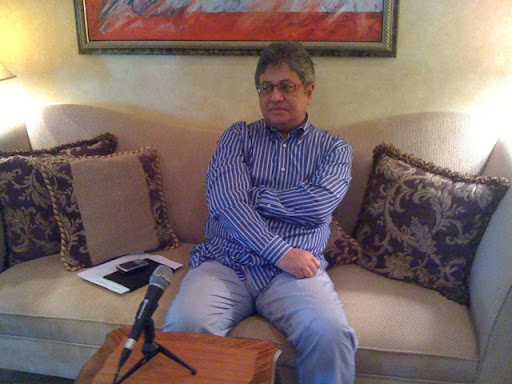 Dato Zaid Ibrahim called for a press conference to announced that he is taking 6 months leave from Parti Keadilan Rakyat (PKR) with effect from today. PC still in progress. Will report further.


Update: Dato Zaid said that he will still be working to try and put together a common policy platform for Pakatan Rakyat (PR) and this had been his primary objective when he joined PKR. He added that he is not interested in internal party politics of PKR nor any other parties of PR and that he had made it very clear to Dato Seri Anwar when he joined the party.

On taking this 6 months leave, he will not be attending the political bureau meeting of the party. This leave will give him more time to focus on matters of PR and its formation and to be above and out of internal politicking.

Dato Zaid said: "I only want to be a facilitator to bring about the realization of a strong, credible and united opposition - an opposition with a strong leadership, sound common policies and structures to be a meaningful alternative to Barisan National (BN) - Only a strong united opposition can restore democracy in this country and can provide good policies to the people."

There has been reports that Dato Zaid had in some way been involved in the politcal frictions of the PKR leadership with regards to Sabah and Sarawak and he said: "I wish to reiterate that i am not at all involved in this issue and that he had visited Sabah and Sarawak on invitations by the PKR leaders to attend Hari Raya function and gatherings and he sees no sinister motive in these invitations."

On another matter with regards to statements made by the Prime Minister on his involvement in money politics when he was in UMNO. And below are his response as per the press release:


"When i was made a Minister, one of the first things i did was to ask the then Anti Corruption Agency (ACA), to investigate findings of money politics against me by the UMNO Disciplinary Tribunal. I believe I was framed by UMNO and found the findings of the Tribunal flawed, where basic rules of evidence were ignored. I felt that a Minister should be free of such misconduct, especially when the Government had committed itself to rid of corruption in the country. I believe my request was acted upon by the ACA and they commenced investigations. I have not heard of the findings till today.

The Prime Minister should not take jibes at me when it suits him. He should be more interested in the truth I therefore wish to appeal to him, to instruct the Malaysian Anti Corruption Commission (MACC) to complete its investigation and the findings disclosed to the public. I am prepared to face the charges if there is evidence of corrupt practice. But if I am innocent, then the Prime Minister should hold his peace and refrain from making such statements in the future."

Email ThisBlogThis!Share to TwitterShare to FacebookShare to Pinterest
Labels: Politics

I just cannot understand what these people want. Can’t they just give and take. These kind of politics may be too deep for me to understand but party leaders and its members must remember that, we, non members supporters cannot remain for long if the squabbling continues. I want my people, he want his people, they want their people to lead, why why why. Can’t they just compromise, work together for the sake of the country and the rakyat. What I can see are self serving bunch of idiots.

Politics is a game played by humans descended from primates and other intelligent species that haven't as yet transcended territorial programs. We can label them "ego conflicts" but the problems don't go away. Even amongst dogs, there is constant tussling for the position of #1 Alpha Male or Top Dog - what more amongst career politicians who have been steeped in the game for decades? Everything is in a state of flux right now. No point throwing up our hands in despair. Let's stay on track with our collective vision of a new dawn in Malaysia free of corruption, injustice and racial discrimination - with a well-informed, cooperative citizenry willing to speak out, stand up and be counted - and who know how to relax and have a good time.

Hi Richard,
We shall wait and see..but we people must stay cool and be united against unjust.. they talk democracy but don't understand shit about it. same type of people..

Hi Antares,
Thats their problem! They keep playing games and pretending. Virtue and Benevolent.. they don't really understand or know.
You are right and we, the people need to stay on track..